NOUS is without doubt the most adorable magazine my work has ever appeared in. Seriously adorable, simply the physical object of it.

My copy arrived from the UK in a tidy collection-worthy packet, complete with wee little sticker and limited edition poster. Billing themselves as the “magazine for mind culture & empathic thinking,” these guys use an artisan printing process and mindful application of vivid interior color.  This thing oozes loving craftsmanship. 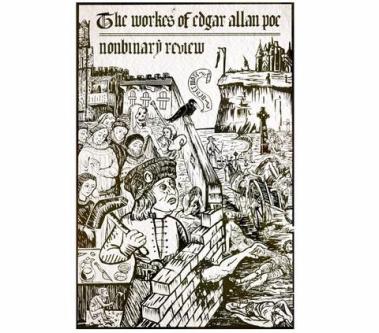 The NonBinary Review is a pretty fascinating venture, a kind of meta approach to the intersection of literature and culture. Issue 12 is dedicated to the works of Edgar Allan Poe, including my oddball little Poe Easter-egg explosion “From Horn to Horn.”

Am feeling so Canadian! Having been an Austinite and a Portlander for so long, I’m having a swell time embracing my Canadianity (Canadianness?), most recently with a sale to the longrunning Canadian SFF anthology series, Tesseracts.

Happy to say I’m following my Tesseracts 19 appearance (“A Week in the Superlife”) with “Dear Houston” in Tesseracts 20, edited by Mssrs. Spider Robinson and James Alan Gardner. A poem this time! A very long poem…

The following was written to coincide with the release of the inaugural issue of Cutaway Magazine. It recently appeared on the magazine’s site:

I usually use the filter of speculative or weird fiction to talk about the things that matter most:  love; death; loss; outsiderism; personal insignificance in the greater universe; that desperate moment when you realise that the fashion ensemble you cobbled together with a mixture of your mom’s castoffs, vintage store jewelry, punkrock teeshirts from high-school you can still squeeze into, ill-advised supertacky dayglo spandex that looked good on the mannequin at the mall does not, in fact, play well at the in-laws’.  Whatever.  These are the important things in life.  Using the lens of fantastical fiction lets me as a writer examine this stuff closely enough to feel it, to write about it, to tap into that intangible something that helps me communicate meaning to a random stranger halfway across the world.

And then there’s poetry.

I confess to often omitting the words “and poetry” when I tell people about PUSH OF THE SKY, my collection of short fiction . . . and poetry.  Earlier this year I was astounded and delighted to have pieces nominated for two speculative poetry awards — the Rhysling (with “Young Miss Frankenstein Regrets”) and the Dwarf Stars Award (with “Solo Missions I Do All I Can,” a space limerick [?!?]).  So I’ve certainly written my share of spec poems alongside my weird fiction. . .  But the two pieces Cutaway Magazine picked up for their inaugural issue are not among them.

Usually when I write what I think of as “straight” — normal people probably call it “literary,” though I have my problems with the term — the words just feel too goddamn raw.  They chafe, slice my skin and leave splinters someplace under my ribs. The few non-fantastical pieces I’ve sold — none of them any more autobiographical than any of my fiction — wrench me in uncomfortable directions.

Some artists apparently like this, crave this in fact. I do not. And yet “Dog” is as raw a piece (and by the far the most autobiographical piece) as any I have ever written, regardless of length or form. It felt right, it is true, it was written with my dog sitting at my feet, and it still makes me cry to read it. I don’t read it often; having written it is enough.  Too much, almost.

“Naked I” doesn’t make me cry, but it still feels very close to my core. That poem is like a bookmark flagging that part of my soul repeatedly wonderstruck by the vastness and complexity of the universe from its smallest particle to its grandest celestial formation. Both the minute personal world of “Dog” and the inconceivably limitless one of “Naked I” carve close to my bones.

So that’s poetry.  When it hits you at the proper angle, a poem is to a novel as a scalpel blade is to a butter-knife.